Golden milk is all the craze right now. It’s an turmeric milk that usually also includes cinnamon and other spices. It has tons of health benefits, like decreasing inflammation, and also tastes amazing! Plus, you can have vegan golden milk in so many other forms besides just as a beverage: ice cream, cookies, cakes, smoothies––the options are endless! Vegan golden milk is so delicious and perfect anytime of the day! You can make smoothies, shakes, cookies, bars, oatmeal, and so much more! Or just go for the classic vegan golden milk latte to start off your day or get over that mid-afternoon slump. Whenever and however you choose to have vegan golden milk, you will love it!

We also highly recommend downloading the Food Monster App  — with over 15,000 delicious recipes it is the largest plant-based recipe resource to help you get healthy! And, don’t forget to check out our Turmeric Archives! 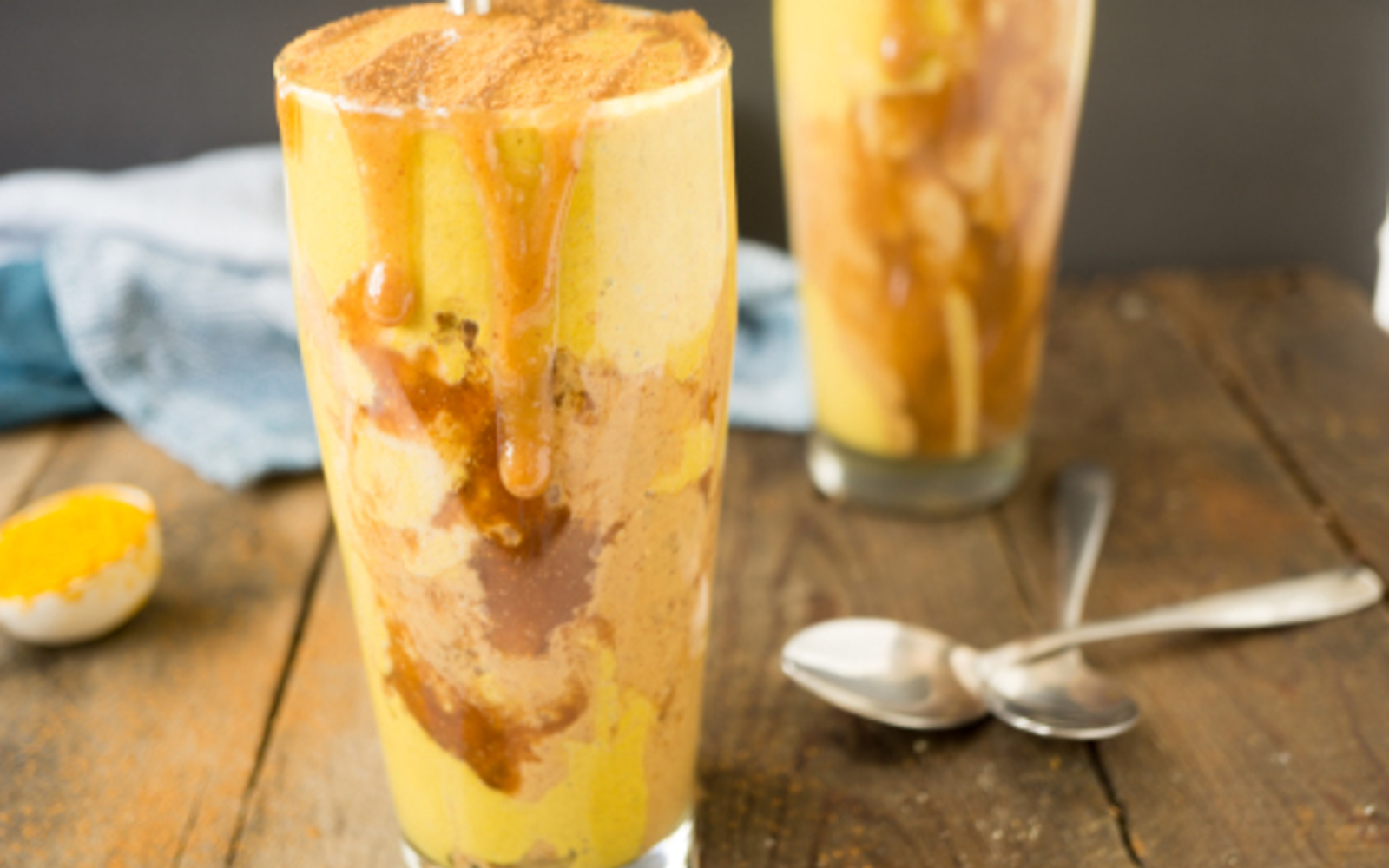 Golden milk, turmeric juice, hot toddys, and turmeric lattes are popping up in juice cafes, coffee shops, and grocery stores. However, if you want something more on the refreshing side, this Peanut Butter Caramel Ribbon Golden Milkshake by Emma D’Alessandro is chock full of all sorts of good-for-you ingredients from turmeric to apricots, avocado, dates, cinnamon, and coconut milk. Not to mention the delicious peanut butter caramel ribbon drizzled in. Yum! 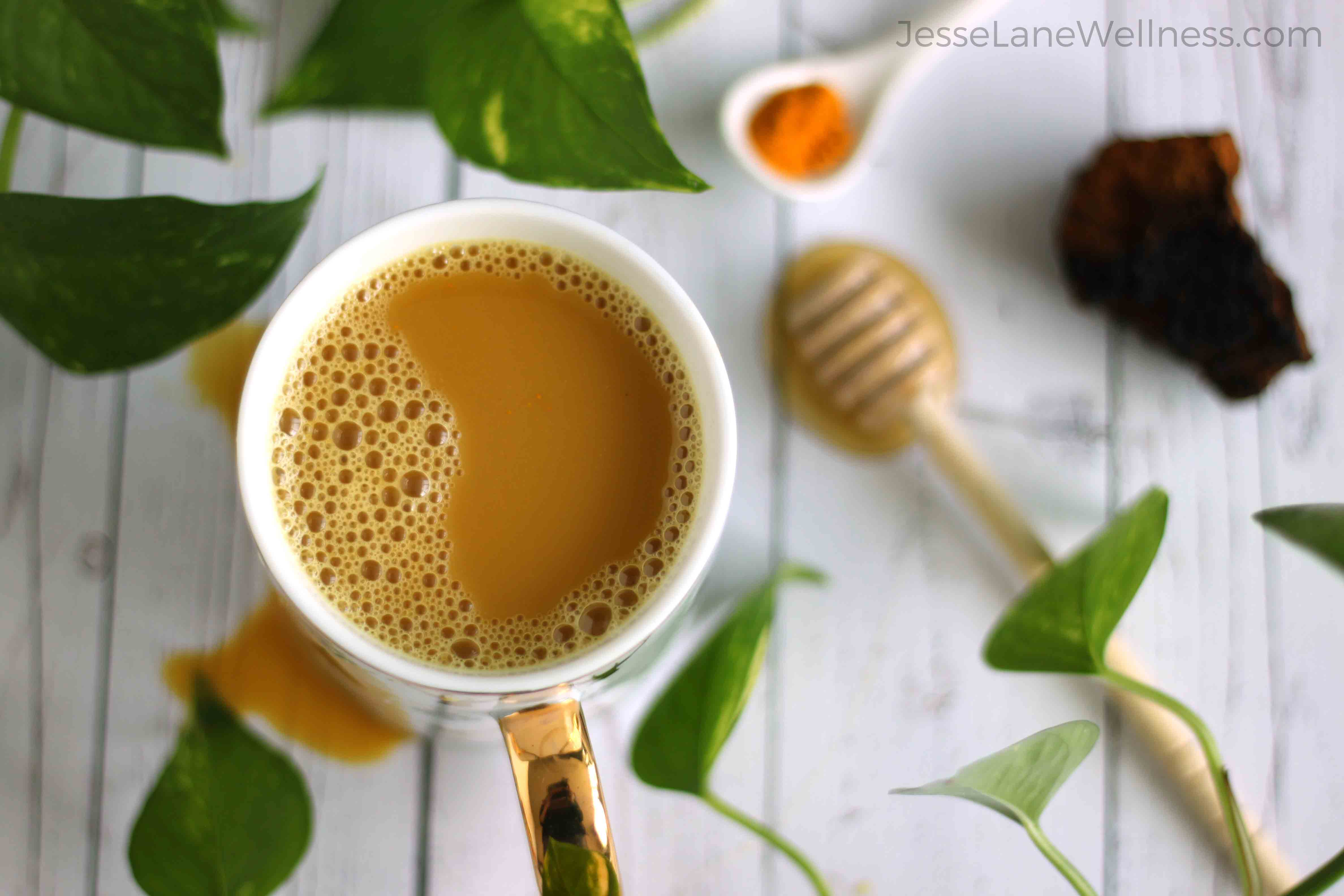 Have you heard of golden lattes? They are so popular right now because turmeric is super anti-inflammatory. This Golden Chaga Latte by Jesse Lane Lee has a chaga twist. 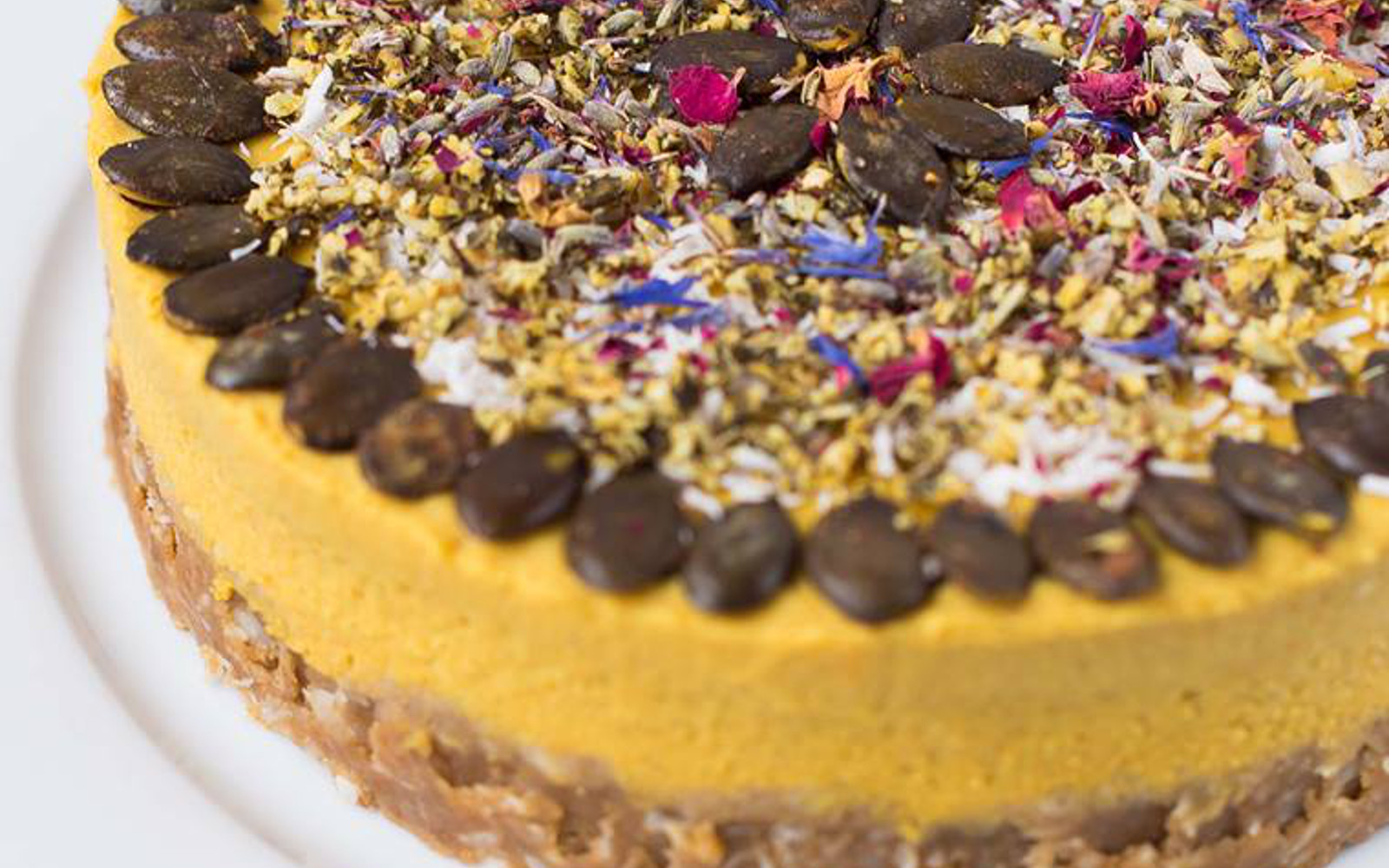 Golden Milk Pie: an aromatic and creamy cake straight from the fridge. Without baking, without gluten, without soy but with a lot of taste! The golden milk promises many health benefits. So why not enjoy it as a Golden Milk Pie? Although it promises greater added value as a warm drink, it certainly has a positive effect on the body in the form of dessert! You have to try this Golden Milk Pie With Sweet Potatoes by Deniz Kilic! 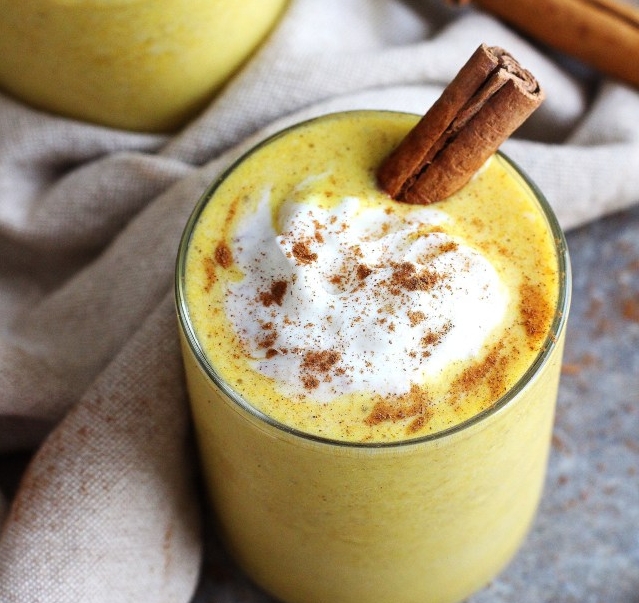 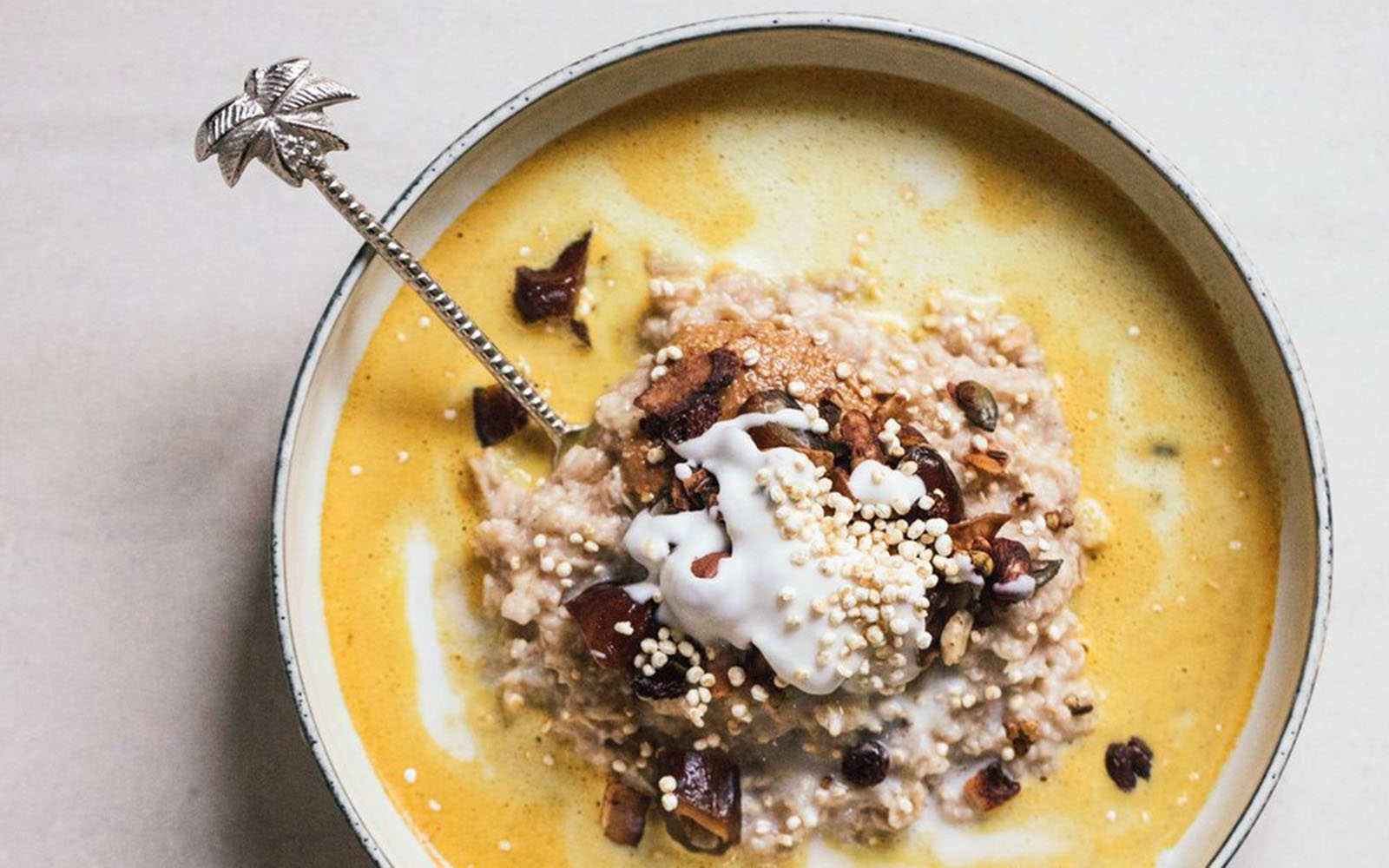 Here is a very simple oatmeal grilled with dates, almond butter, chai spiced granola and of course my favorite milk! This breakfast is so incredible good! You have to try this Golden Milk Porridge With Citrus Yogurt by Natalie Yonan! 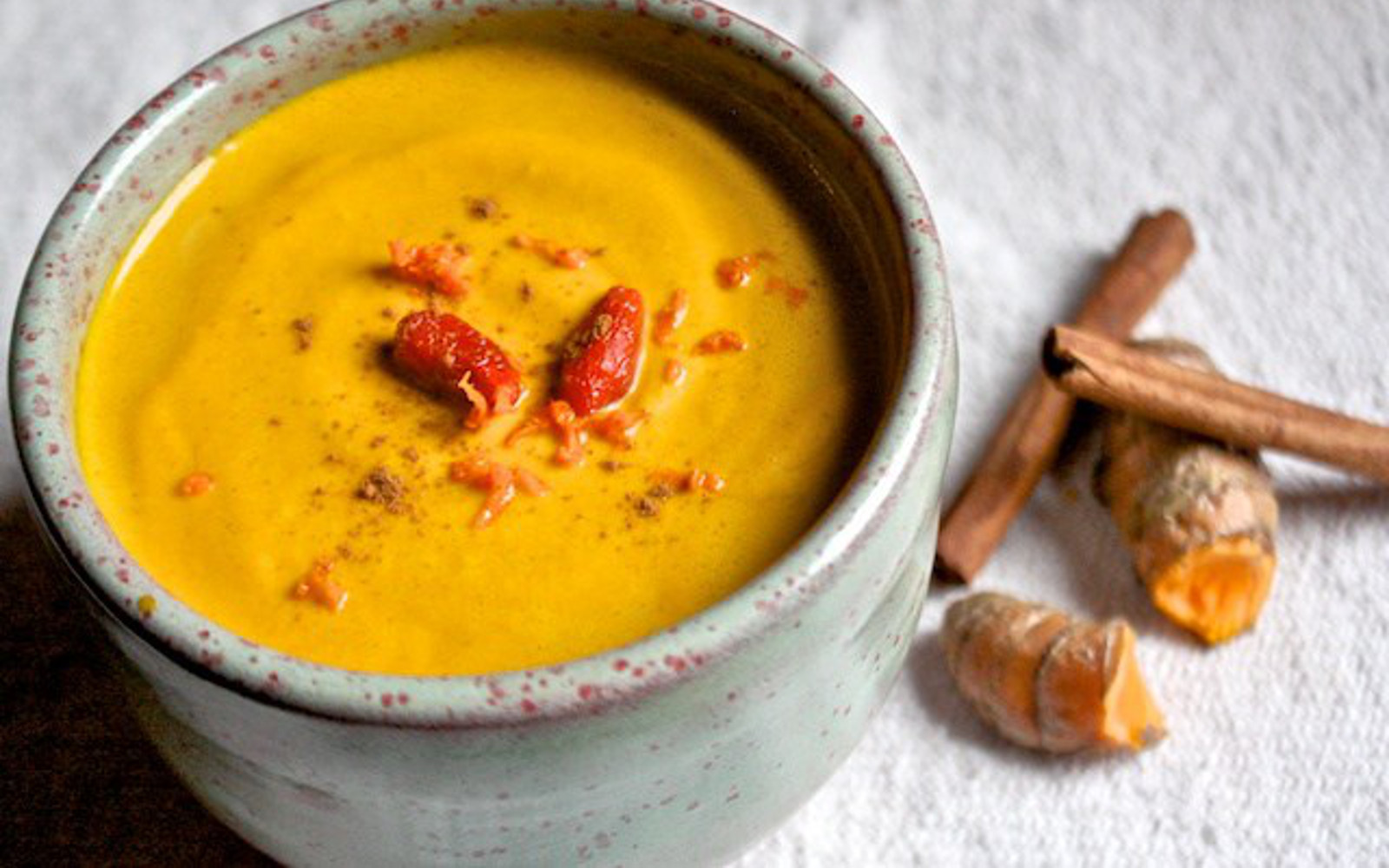 What’s better than golden milk? Golden milk infused with goji berries! This stuff is pretty magical thanks to fresh turmeric. It’s got such a bounty of health benefits, not the least of which is its amazing anti-inflammatory properties. Turmeric also helps with sleep, and guess what? So do goji berries, so this Goji Berry Golden Milk by Helyn Dunn is really a kicked up golden milk! 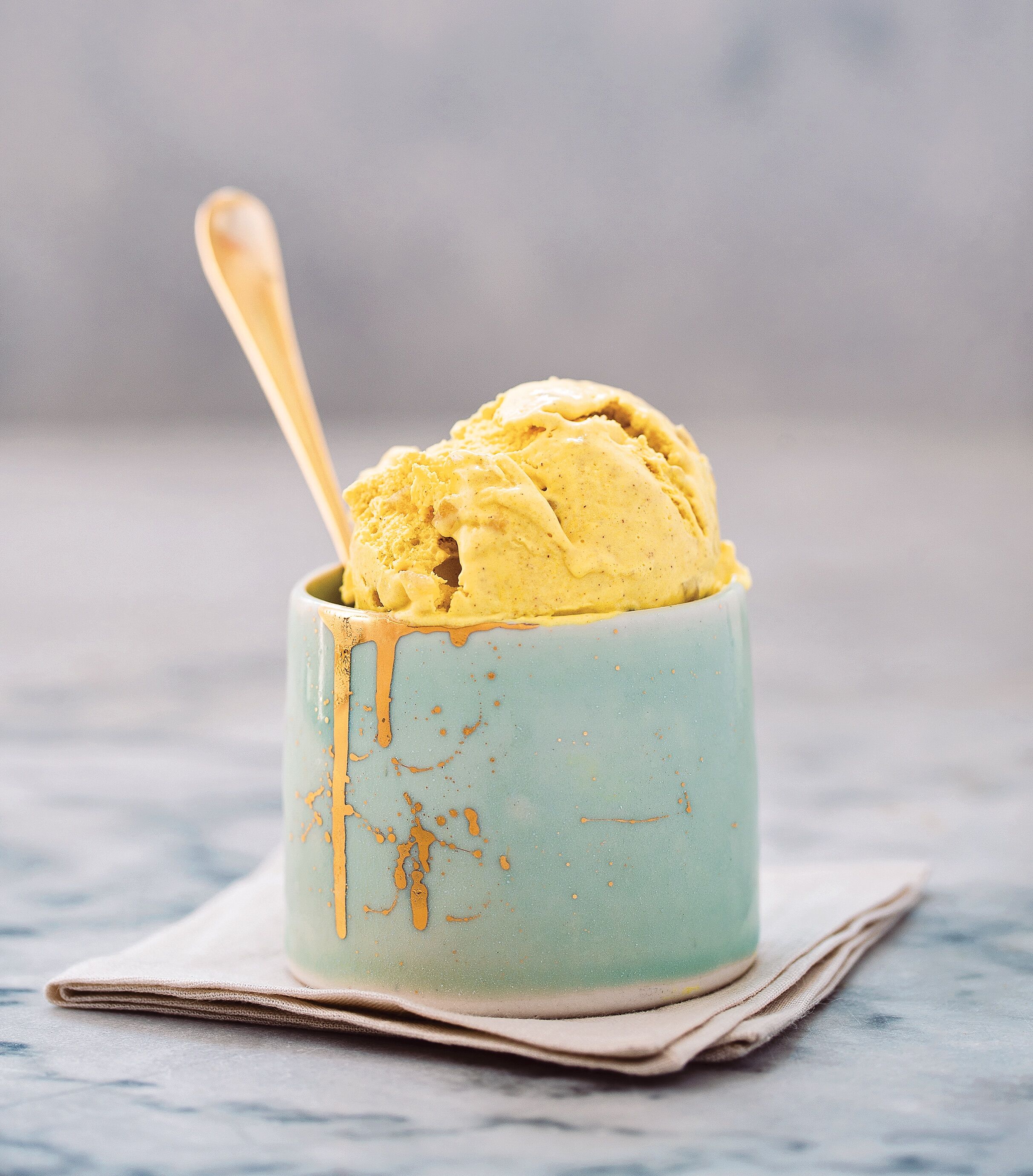 For those who haven’t yet been dazzled by this trendy drink, it is delicious and great for you. Inspired by a traditional Indian tea, this beautifully vibrant yellow drink includes ginger, turmeric, and cinnamon, all known for their anti-inflammatory and antiseptic qualities. This Golden Milk Ice Cream recipe by Incredible Vegan Ice Cream, Deena Jalal contains all of the elements of the famed drink in a cool, creamy scoop. The addition of finely diced crystallized ginger adds flavor and lovely shimmering chunks to every scoop. 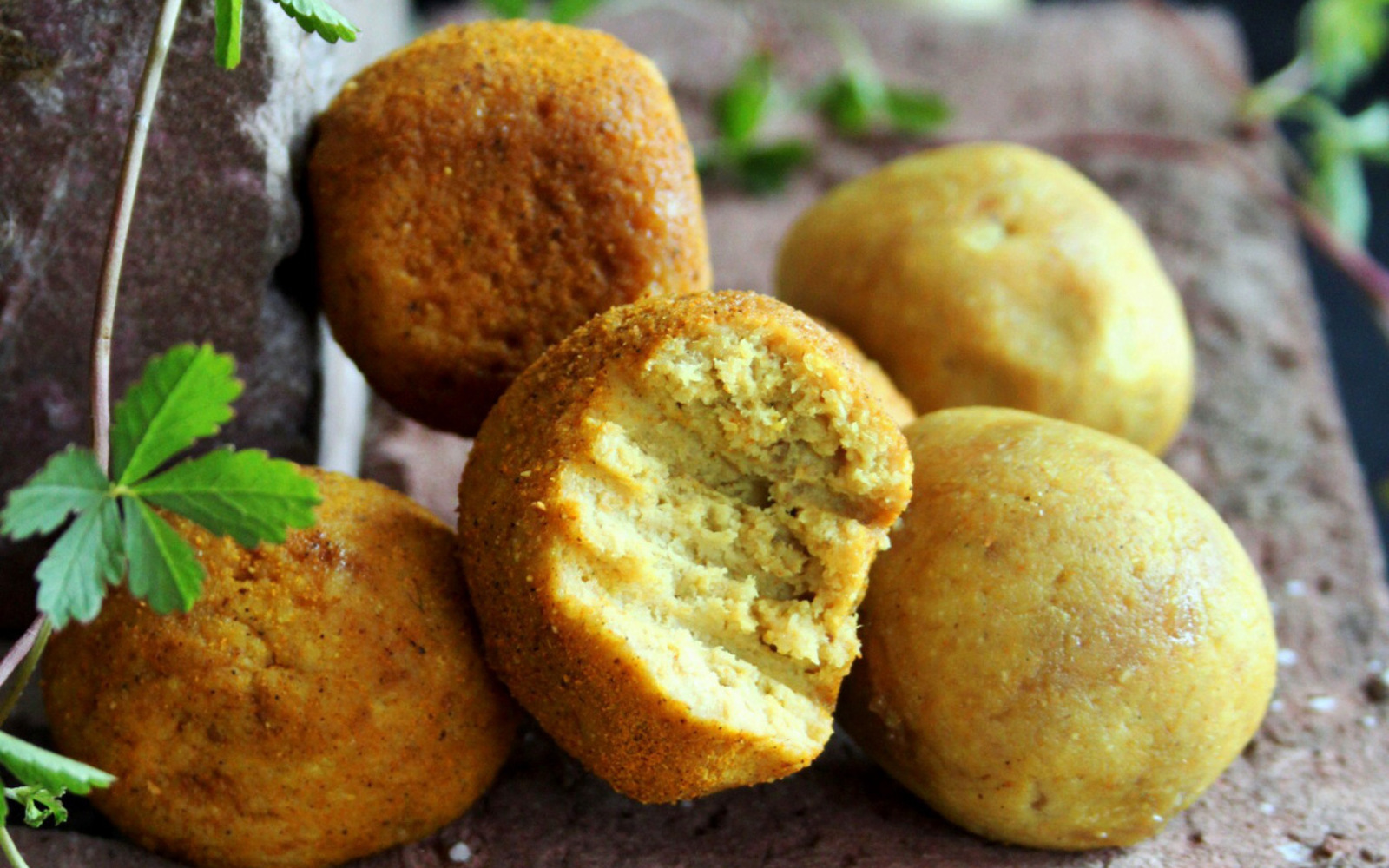 Sneak more turmeric into your diet with these Raw Golden Milk Bliss Balls by Lena Pfetzer! They are made from oat flour, coconut, peanut butter, and agave and then dusted with coconut and turmeric powder. Delicious and energizing! 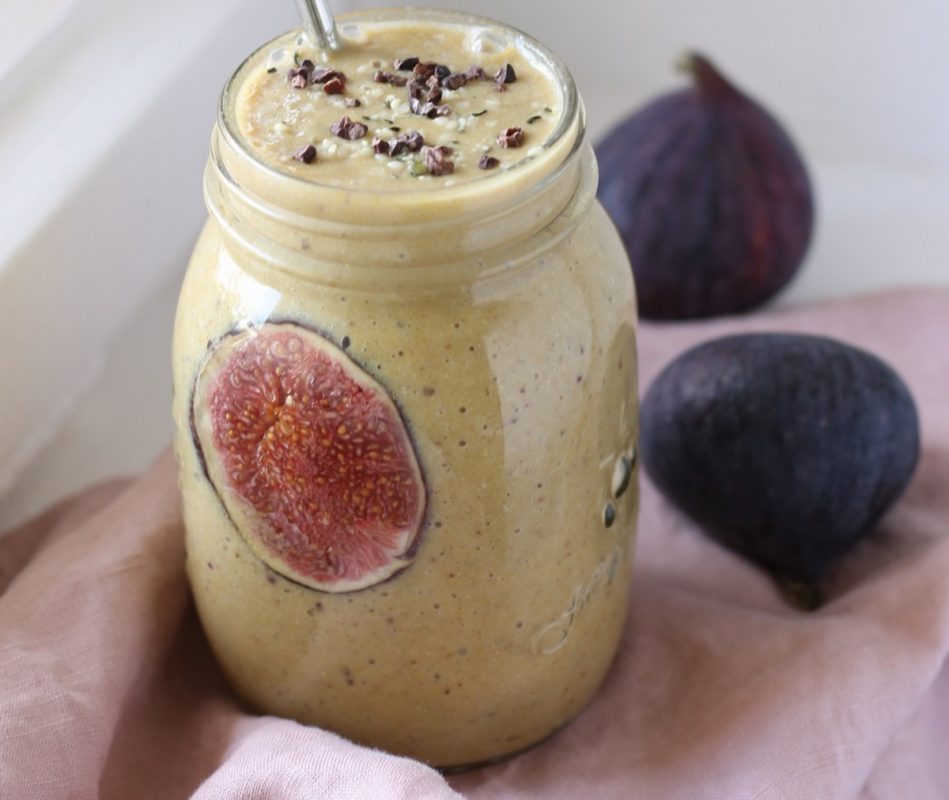 The Golden Banana Milkshake recipe by Aryane Héroux-Blais is as simple as pureeing bananas, milk and spices in the blender. That’s it. Enjoy this filling and very healthy shake for your next breakfast! 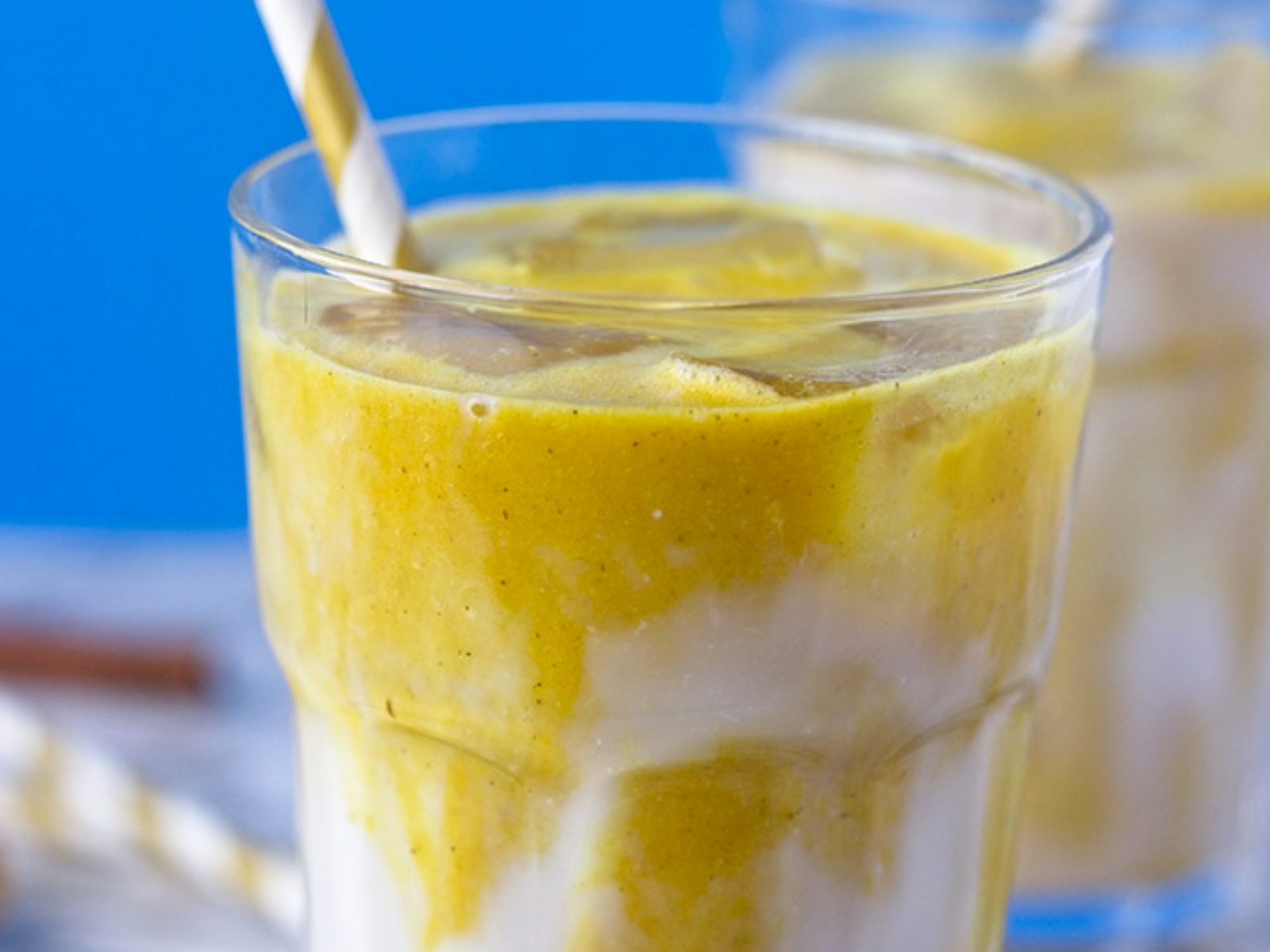 Enjoy the amazing benefits of turmeric in this cooling drink that’s perfect for summer. This wholesome Vegan Iced Golden Milk Latte by Nicole Dunai is a delicious and easy way to include turmeric in your diet! 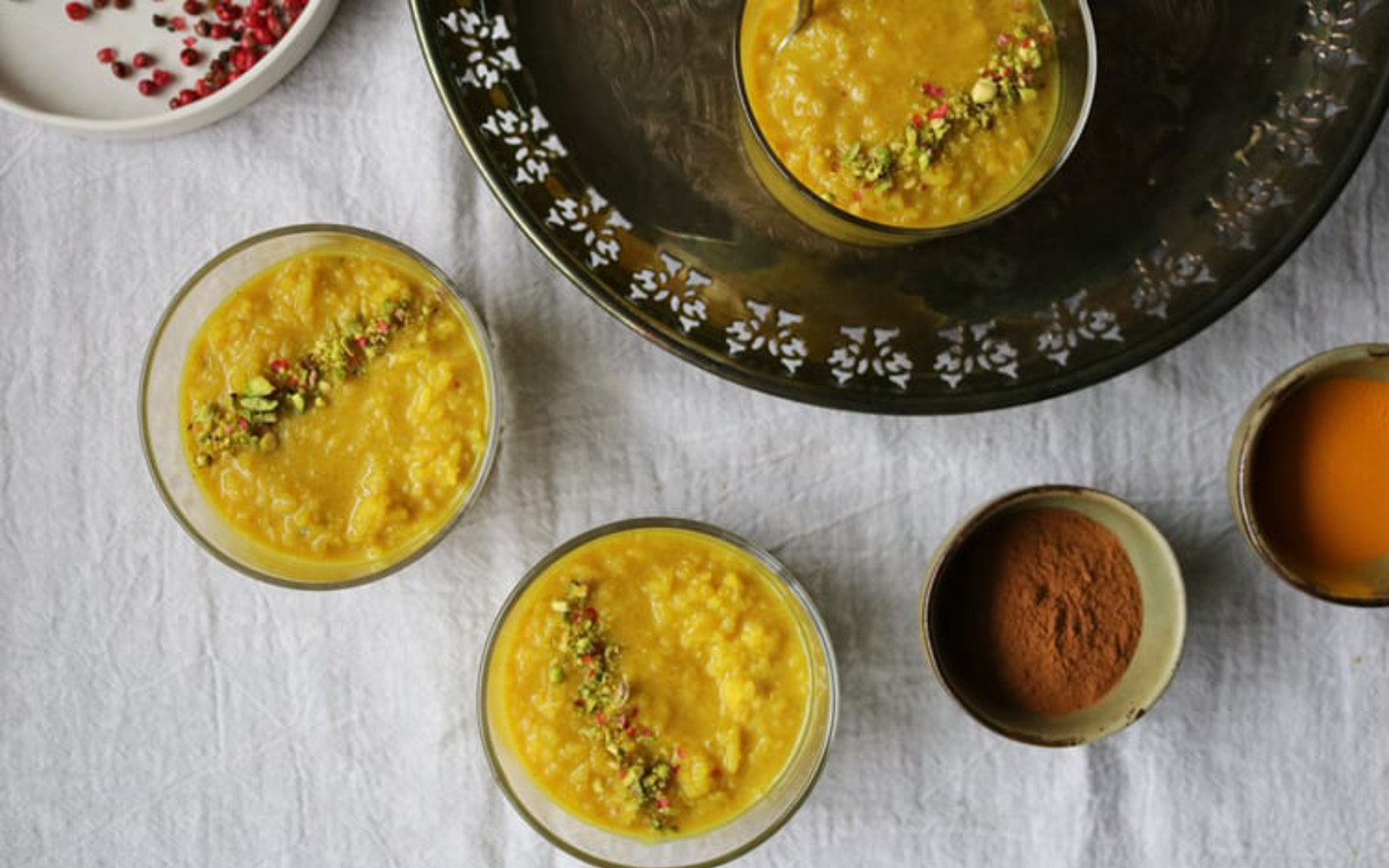 This Golden Rice Pudding With Turmeric, Ginger, and Pink Peppercorns by Christine DesRoches is a pin on the Ayurvedic turmeric-based beverage, golden milk. This lightly-sweetened pudding is a medley of flavor with turmeric, cinnamon, cardamom, star anise, peppercorn, and ginger. It’s a health-promoting treat that’s perfect for anytime. 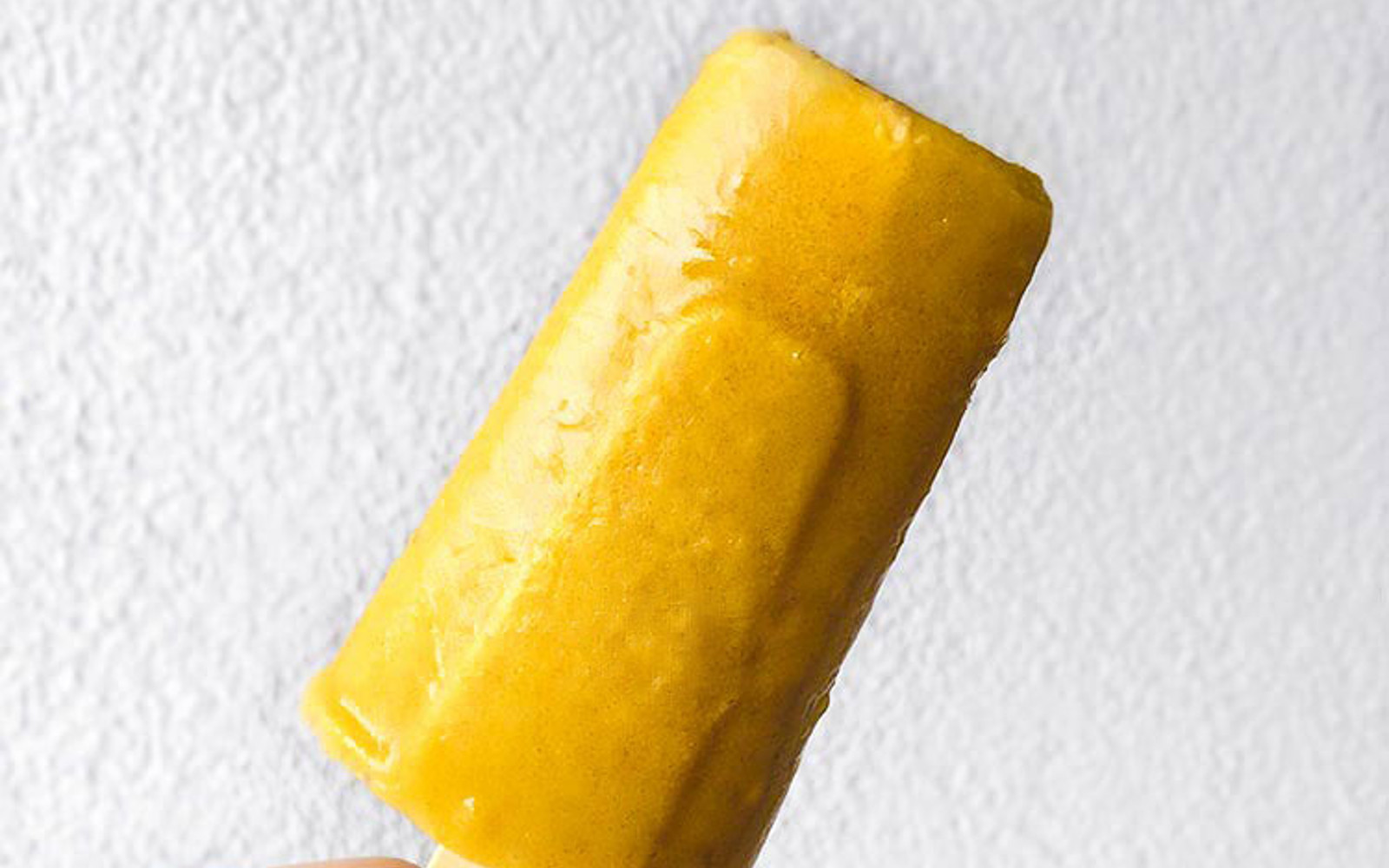 Golden milk is so delicious and with this recipe, you can enjoy it on a hot day in the best possible way – in a popsicle obviously. This simple Golden Milk Popsicles recipe by Bianca the Green Creator takes about ten minutes of prep time and then you pop your soon-to-be-frozen treats in the freezer and wait. It’s incredibly easy and these popsicles are crazy delicious. 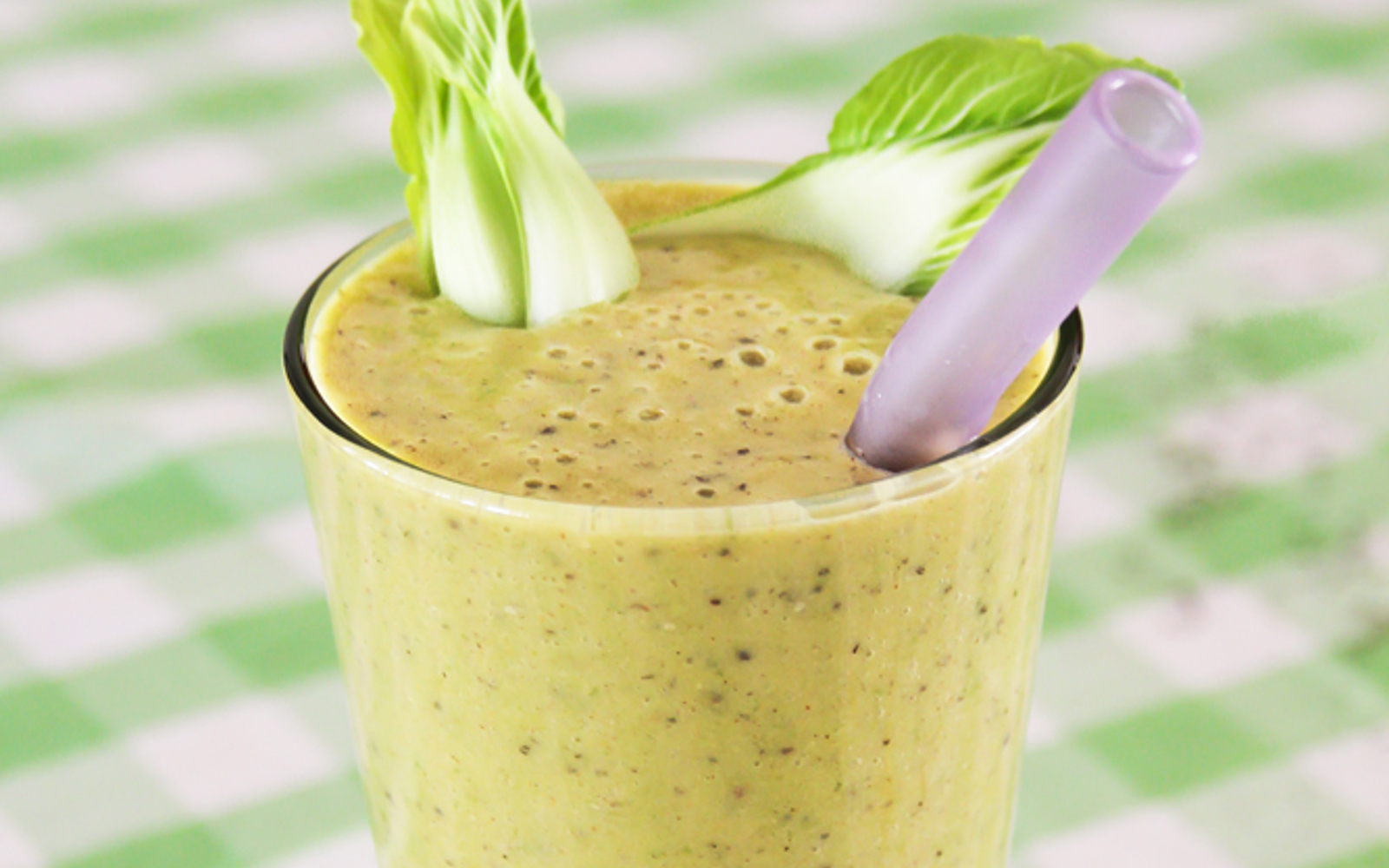 This smoothie is so good you’ll be hard pressed not to scream, “Yasss queen!” This Green Goddess Golden Milk Smoothie by Molly Patrick is packed with bananas, turmeric, and ginger so this creamy confection is delicious and also super healthy. 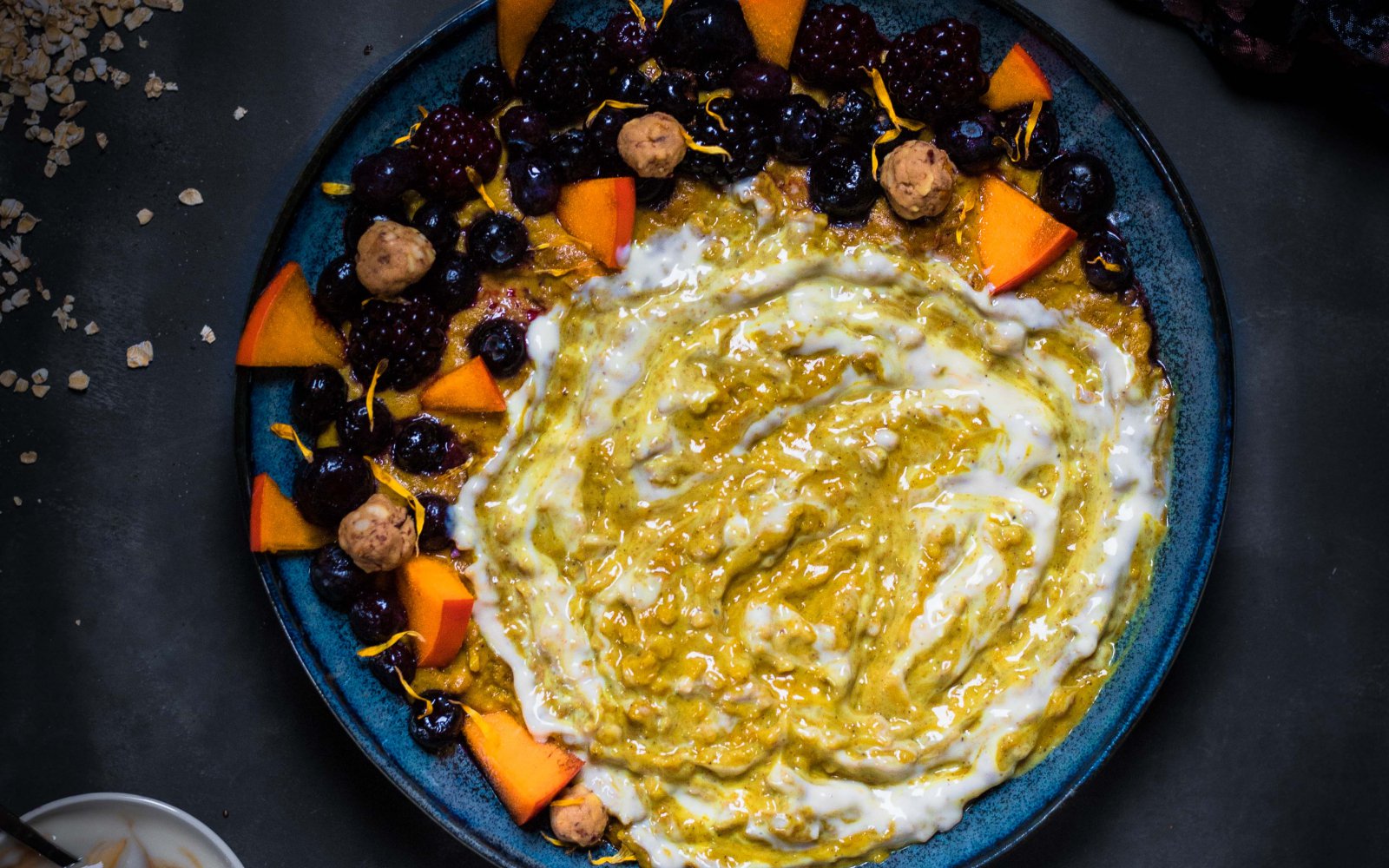 This delicious Coconut Golden Chai Oatmeal by Anarki “AJ” Tjon Affo is sure to warm you up and give you comfort on the coldest of winter mornings. 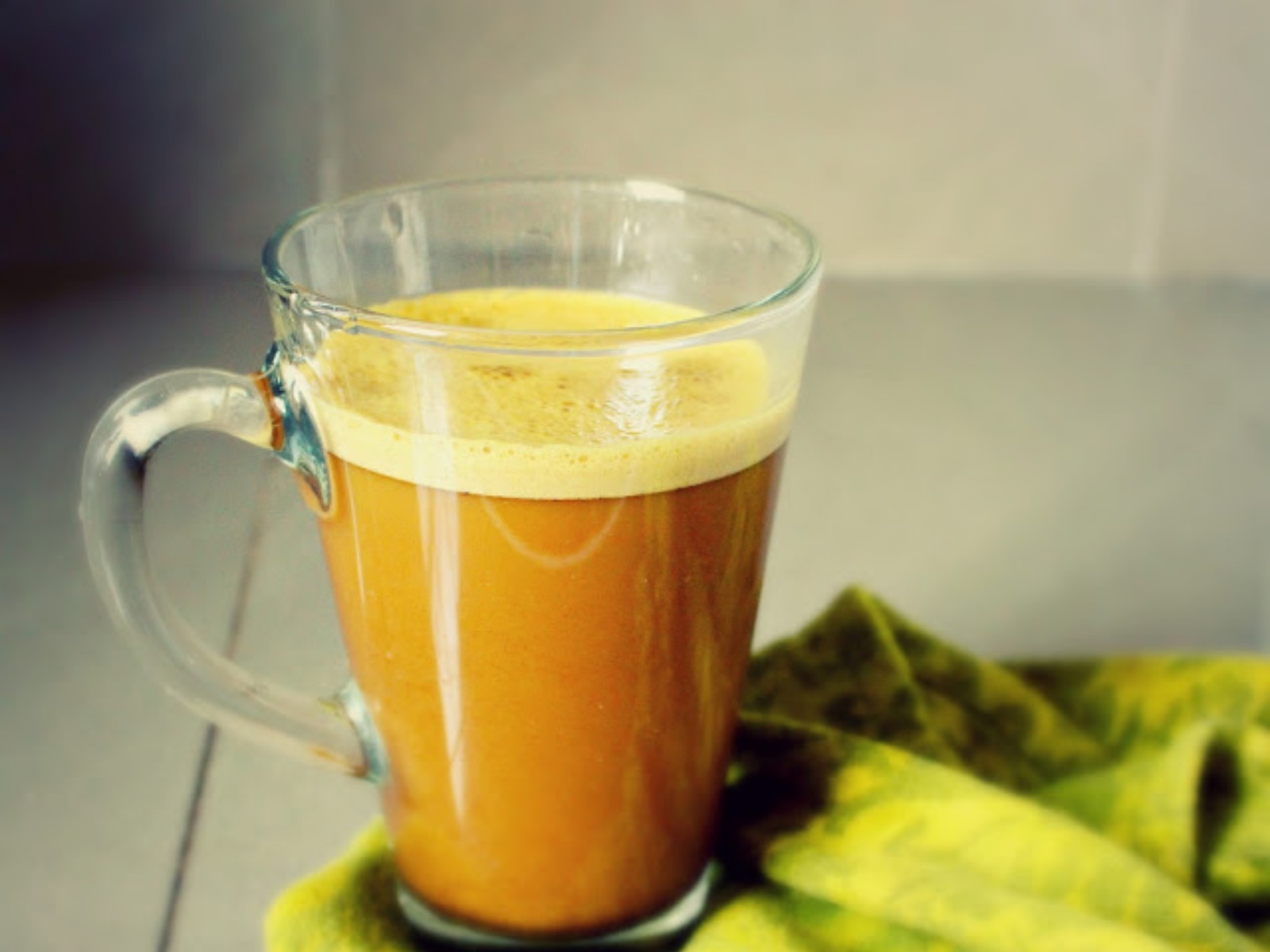 Have you heard of “Golden Milk”? It’s basically a non dairy milk recipe that you enjoy hot that’s full of warming and super healthy spices like turmeric. This Golden Latte by Danielle Dewar is basically a golden milk latte.

Learn How to Cook Plant-Based Meals at Home! 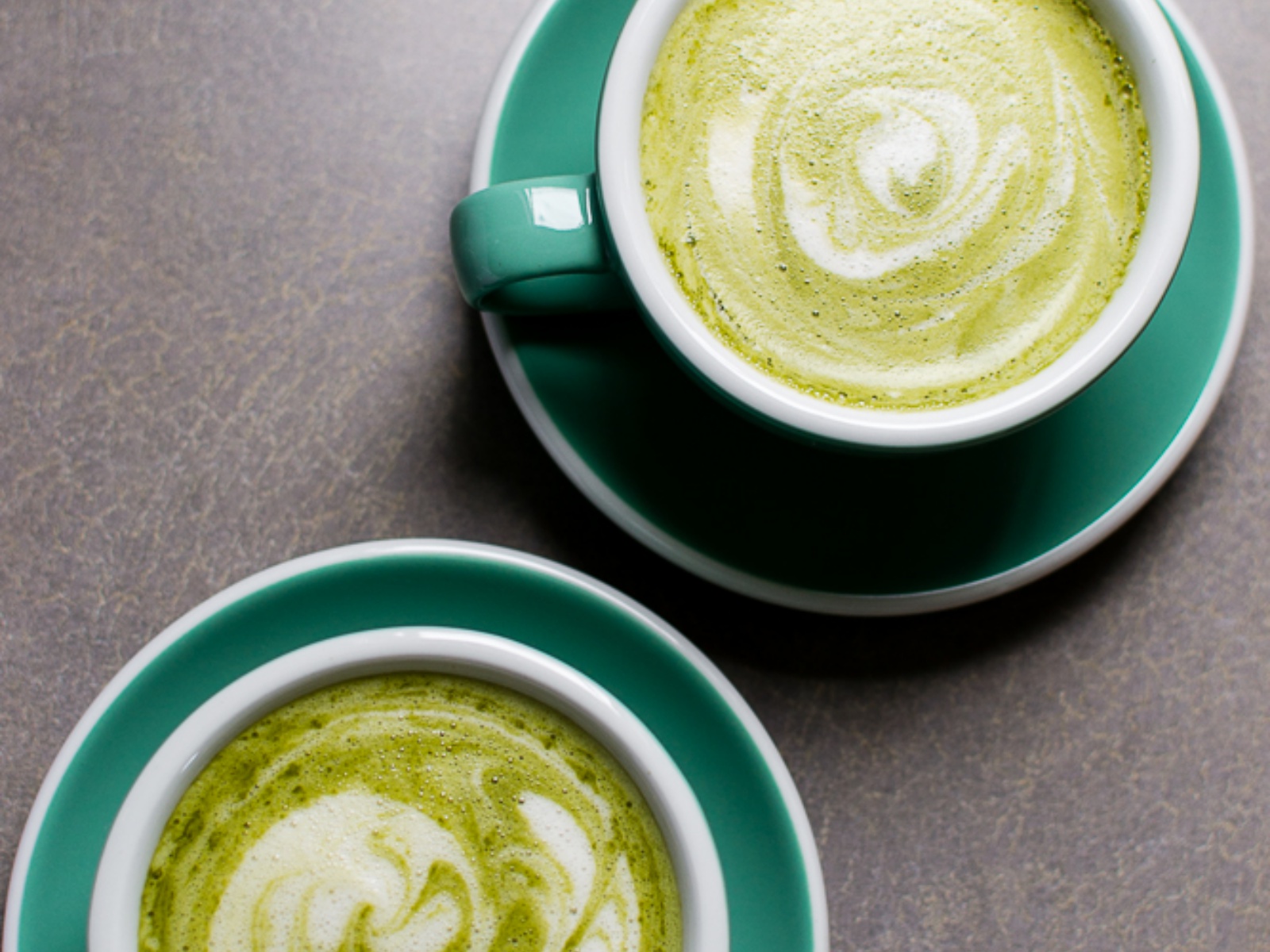 For those of you interested in eating more plant-based, we highly recommend downloading the Food Monster App — with over 15,000 delicious recipes it is the largest plant-based recipe resource to help reduce your environmental footprint, save animals and get healthy! And, while you are at it, we encourage you to also learn about the environmental and health benefits of a plant-based diet.

Here are some great resources to get you started:

For more Animal, Earth, Life, Vegan Food, Health, and Recipe content published daily, subscribe to the One Green Planet Newsletter! Lastly, being publicly-funded gives us a greater chance to continue providing you with high quality content. Please consider supporting us by donating!